The Boys Varsity Soccer team received $800 to purchase much needed equipment for the season.  According to Coach Kevin Cram, they had a young team but did well after suffering two losses early in the season.

With a lot of underclassmen players, the Boys went to the  Division II State tournament after capturing the KIF title.  They made it to the championship game by beating Waipahu and McKinley but lost to Kamehameha School Hawaii 3-2. 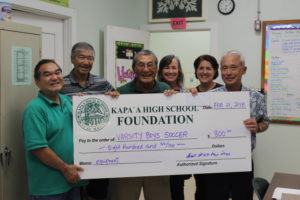