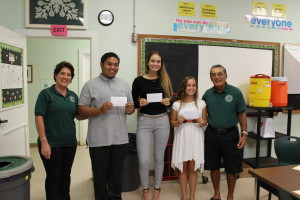 The Kapaa High School Foundation awarded grants of $1000 each to five outstanding Seniors from the graduating class of 2016.

Coleman Langstaff will be attending Cal Poly San Luis Obispo in California and majoring in business.He was an active member of the Interact Club, National Honor Society, and Big Brothers Big Sisters Kauai.  He was also active at the Lihue Missionary Church helping the Youth Ministry Leaders where he was known as a “polished team player.”  With all the activities he participated in Coleman was still able to maintain his honor student status with a high gpa.

Sara Morimoto will be attending Western Washington University in Bellingham, Washington and majoring in Electrical Engineering.  She also plans to get a minor degree in Theater.  She was an active member of the Interact Club, National Honor Society, and also volunteered or Hawaii Children’s Theater and Kauai Ocean Recreational Experience(KORE)  Her passion however, was in being involved in KPAC(Kauai Performing Arts Center)  She performed in eight KPAC productions. and directed a Middle School play.   Being involved in the productions require a huge commitment in time, with countless hours of rehearsals and performances, but Sara demonstrated excellent time management skill by doing it all and graduating as a class valedictorian.

Kunani Tuttle will be attending Willamette University in Oregon with plans to major Biology to get into a pre-med program.  She was active in Interact Club, National Honor Society, and Student government while maintaining a 4.0+ GPA.    Besides being on the varsity volleyball and basketball teams, she also had an active leadership role in the Church of Latter Day Saints, helping with food drives and other service projects.  Kunani is described by her church Bishop as” a model young person; intelligent, thoughtful, and friendly.  She  is highly respected because of her upright character and genuine personality.”

Rukiyah Walker  will be pursuing a degree in Education at California State University at Monterey Bay.  Her goal is to one day  return to Hawaii and  be a Math teacher   This cheerful young woman has been active in Interact Club, National Honor Society, and Earth Club, and participated in Cross Country and Soccer.  While being active in her school and community she managed to maintain a cumulative gpa of 3.8.

Jalen Yago will be attending UNLV in the fall with plans to major in Chemistry.  His goal is to get into a School of Pharmacy, possibly at UH-Hilo and serve the people of Hawaii as a pharmacist.  While at Kapaa High School, Jalen was active in Student Government, National Honor Society, Interact Club,  and Key Club.  He also was on the Varsity, Volleyball, Bowling,  Cheerleading and Tennis teams. He was also actively engaged in social and community service events with the  Youth Ministry at the St. Catherine Church.  According to  National Honor Society advisor Tara Punzal, this energetic young man is known for being “hardworking, positive,  and of excellent character.’