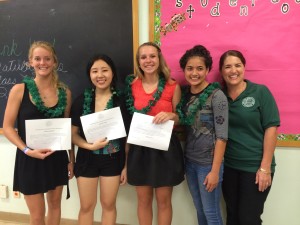 The Kapaa High School Foundation awarded  grants of $1000 each to  four Seniors who demonstrated extraordinary commitment to community service while pursuing their academic goals.

Shania Weiss plans to attend the University of Hawaii this fall with plans to major in Nursing.  Being from a family of seven children, she understood from an early age that she would have to be responsible for providing for her own college education.  Besides being a caregiver to her younger siblings, she worked   30 hours a week  during high school to cover her school and personal expenses.  She also participated  in Swimming and Cross Country and was captain of her Team Surfing Club.   In spite of her hectic schedule, she  graduated as a valedictorian of her  class with a 4.2 gpa.

Shania is described as a mature, independent, and bright young lady.  In the Interact Club she held a leadership role as one of the Committee chairs,  planning and supporting  social and community service events throughout the year.   According to Interact Club advisor Joan Kealalio, “her passion for helping other people is in her soul.”

Kelsie Lima will be heading to UC Davies in the fall to major in Veterinary Science.  Her passion for animals led to to  spend many hours as a volunteer at the Kauai Humane Society as a veterinary assistant.

Kelsie is also active in her church as a key alter server and helps to train new alter servers.  Her pastor Father William Shannon describes her as being polite, friendly and highly energetic.

Kelsie’ was born in China and orphaned at an early age.  In her words, “my world was bleak until these wonderful people came and adopted me.  Because of my parents, I  received a proper education, knowledge, and experience I have been able to travel and learn about different parts of the world.  I developed a sense of being loved and I have been able to develop dreams.”   She now dreams of returning the aloha that was shown to her to the people of Hawaii.

Cassidy Yatsko will be attending   Boise State University in the Fall  to  pursue a  a degree in Psychology.  Her goal is to be a school counselor.

Cassidy grew up in a family that believed in compassion and community service.  Growing up, she spent a lot of time at her Dad’s workplace, Friendship House, a rehabilitation  program for people with mental illness. She became inspired by by how the members responded to the  treatment they received, getting jobs, going back to school and finding housing.  Her spirit of volunteerism led her to become a Youth Group leader for All Saints Church for seven years, participating in projects that took her to Los Angeles to help the homeless, and helped to run an afternoon program in gang ridden housing projects in East LA.    As President of the Kapaa High Interact Club and a member of the National Honor society, she helped plan, organize and worked on numerous service projects throughout the years.  At the All Saints Church she was known as being “literally filled with joy in being able to serve others.”

Although she participated in countless hours of community service, Cassidy showed her ability to manage here time well.  She graduated as one of the valedictorians of the Class of 2014.

Kekai Gonsalves will be attending  Brigham Young University in Provo, Utah   with plans to major in English.   Besides focusing on her academic goals(she was a valedictorian of the Class of 2014,) Kekai held three passions; athletics, church, and community service.

A gifted athlete, Kekai excelled in soccer, basketball, and track.During her Junior year she was named captain and league all star for soccer  and basketball.  On the track team she was chosen as MVP.  However, during most of her senior year she was sidelined with a knee injury.  In spite of her physical and emotional pain, she demonstrated good sportsmanship and a good heart by attending all of the games to cheer her teammates on.

At the Church of Latter Day Saints, Kekai  served as President of the Mia Maid Class, Laurel Class and Secretary of the LDS Seminary Class.  These classes are structured to teach young women about the Scriptures, how to make good choices, and  live virtuous lives.  They do service projects and give support to new members that seek guidance.  For her Laurel Class project, Kekai organized an event  to recognize and honor the kupunas at their church.    Trinette Kaui, her youth advisor,  relates that Kekai was always a positive person that everyone loves to be around.

During her senior year, Kekai was elected Class President, one of the most demanding postions in student government.  She  was also National Honor Society President and a member of the Interact Club.  Being committed to these three  leadership and service organizations  required her to be somewhere involved in a meeting or project almost every day.  She also excelled academically,  graduating as one of the valedictorians of her class.