Kevin Cram has been coaching the high school team for seven years now, and has brought the Kapaa team to the State Tournament six years in a row.

In this years State Tournament, Kapaa played in the championship game but came up short, losing to Honokaa 1-0.    Two of Kapaa players were selected to the All Tournament Team.  They  were defender Ty Shiramizu and goalkeeper Shane Nishioka-Healy.  Back on Kauai, Coach Cram was named  KIF Coach of the year.   Nishioka-Healy and Shiramizu was joined by Josh Cram, Daniel Alonzo, and Dylan Devin on the KIF All Star team for 2012. 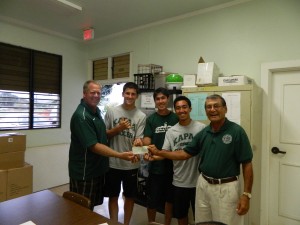